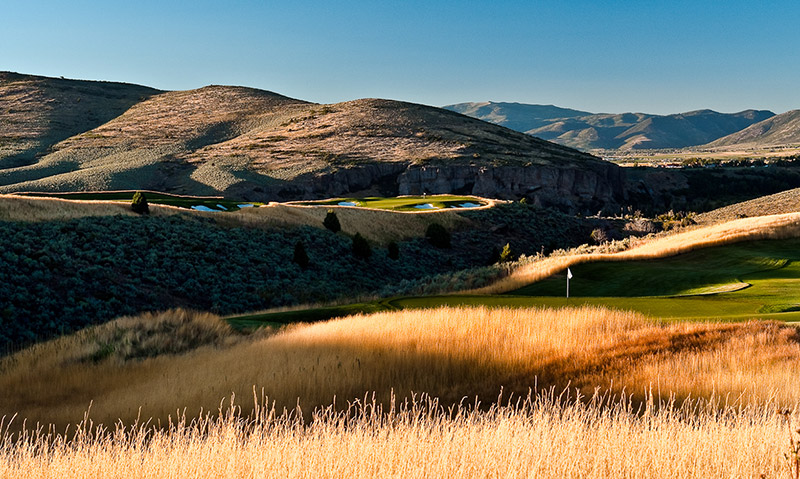 A little over midway through the wild month of May in the Wasatch Mountains, a rainstorm of Biblical proportions — or so it seemed for a few moments — fell upon the sage-clothed hills above northeastern Utah’s Kamas Valley. A mighty southwesterly gale blew the stinging, icy drops sideways and turned umbrellas inside out. And among the furious nature-fray, three lone golfers (some might question their sanity) stood on the ninth tee box at Victory Ranch Club like punch-drunk fighters.

We staggered up the 9th fairway, found our balls, hit them, then again and again, finally made the green in howling wind, putted out and packed it in for a warm-up and homemade sandwich in the clubhouse. Guess I’d have to see Victory Ranch’s even more spectacular back nine another day. Too bad, because its setting on a plateau above the Upper Provo River is pure mountain gold, even when the vagaries of spring weather at 6,500 feet above sea level threaten to throw a frozen wrench into a round.

Then the rain slowed, the wind died and Rees Jones’ rambling, rolling, bunker ridden beauty drew us back in. We went on to finish in just enough time for me to make my flight back to Reno at the Salt Lake City Airport, an hour’s drive away past Park City and over Parleys Summit, All I can say is… “Thank you, God” — not only for putting off Judgment Day but for letting me dig into Victory Ranch’s final stretch, which might be the finest, most dramatic trio of holes in a state that’s loaded with heart pounding golf scenery. No. 16 alone — a cliffhanging uphill par 5 with a stair-stepped green that seems to hang on the edge of forever — is alone worth the effort to experience this secluded (but not dauntingly so) masterpiece.

“Jones’ big-shouldered design is a great change of pace from the 36-hole Promontory complex with its Pete Dye and Jack Nicklaus courses. “I played here about a month after they opened in ’09, in September. The fescue rough was full blown,and that framed looked was fabulous. It’s just a great layout — it’s all out in front of you, no real blind shots or tricked-up shots, the greens have movement but are playable. Jones likes to create plateaus on the greens so you can have lots of pin placements. There’s a great use of bunkers, typical Rees Jones — whether it’s a fairway bunker for aiming or psychological purposes or a greenside bunker. And the maintenance and grooming are outstanding.” Steve Hupe – Former GM

There’s plenty of land to maintain, including what must be the largest number of tee boxes on one course in all creation, including a whopping 14 on what’s probably Victory Ranch’s signature, No. 17, a 242-yard par 3 playing over an old rock quarry to a precipice green. “It’s not contrived. When you look at the land, they stretch from 240 to 150 yards. We can adjust the tees based on the wind and create new angles.”

When Jones was asked about why he built so many boxes, he said, “Because I could.” It was a bold move, but it works. Victory Ranch is, as the old song says, “so much larger than life,” with enough mid- and long-range views of the Wasatch and Uinta mountains, Deer Valley Ski Resort and Jordanelle Reservoir to put it all in perspective. A few rambling, exquisite members’ homes are starting to pop up here and there, a big lodge is already in place next to the river and the permanent clubhouse’s planned site — high on a hilltop looking over the entire golf course and surrounding Course! God’s country — is enough to leave you breathless.

Midyear highs at this altitude reach well into the 80s, and the Marta, days are long and languid and full of plenty of promise for every lover of the great outdoors. Some of America’s greatest wide-open-space fun, from world class fly-fishing on the Upper Provo River, to hiking and mountain biking, is right outside Victory Ranch’s gates, though it’ll be tough to take a break from this Rees Jones masterpiece.

Brian Oar is an award-winning golf course photographer based in Southern Utah. Brian's work has been published in nearly every major golf magazine in the country, and many internationally. Chances are you have seen his work many times. Regarded as one of the best photographers in the business, Brian is also one of the founding owners of GolfPackagePros, a niche golf packing company specializing in St. George, Mesquite, Las Vegas, Laughlin, Kauai, Branson and Park City. 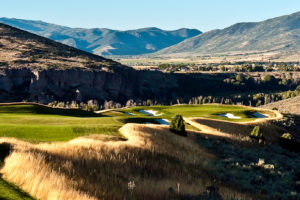 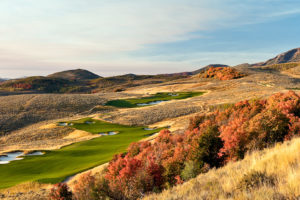 Set against the mountain backdrop of Utah’s world-class ski areas[...] 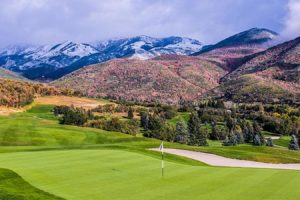 ©2017 All Photography by BrianOar.com - All Rights Reserved - No image reproduction or usage allowed without prior written consent - ParkCityUtahGolf.com is owned and operated by GolfPackagePros